The film world is full of intriguing what-ifs. Will Smith famously turned down the role of Neo in The Matrix. Nicolas Cage was cast as the lead in Tim Burton’s Superman Lives, but he only had time to try on the costume before the film was canned. Actors and directors are forever glancing off projects that never get made or that get made by someone else, and fans are left wondering what might have been.

For the people who make money from movies, that isn’t good enough.

If casting Alicia Vikander instead of Gal Gadot is the difference between a flop and smash hit, they want to know. If a movie that bombs in the US would have set box office records across Europe, they want to know. And now, artificial intelligence can tell them.

Los Angeles-based startup Cinelytic is one of the many companies promising that AI will be a wise producer. It licenses historical data about movie performances over the years, then cross-references it with information about films’ themes and key talent, using machine learning to tease out hidden patterns in the data. Its software lets customers play fantasy football with their movie, inputting a script and a cast, then swapping one actor for another to see how this affects a film’s projected box office.

Say you have a summer blockbuster in the works with Emma Watson in the lead role, says Cinelytic co-founder and CEO Tobias Queisser. You could use Cinelytic’s software to see how changing her for Jennifer Lawrence might change the film’s box office performance.

“You can compare them separately, compare them in the package. Model out both scenarios with Emma Watson and Jennifer Lawrence, and see, for this particular film … which has better implications for different territories,” Queisser tells The Verge. 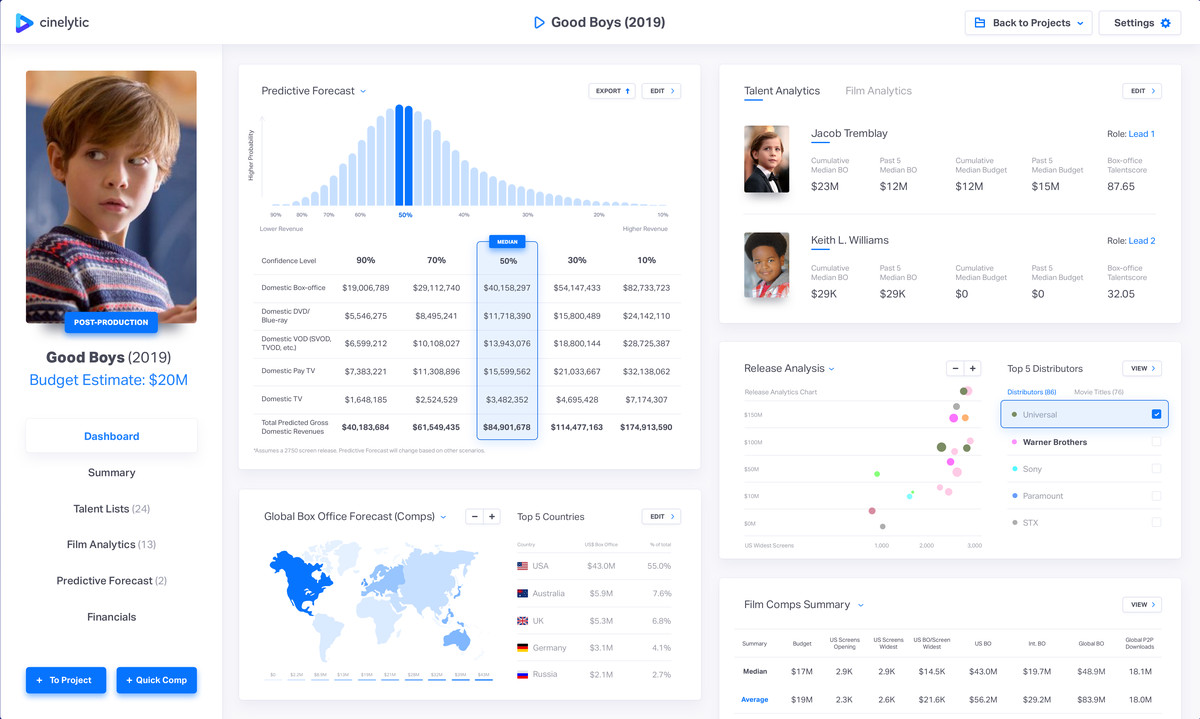 Cinelytic isn’t the only company hoping to apply AI to the business of film. In recent years, a bevy of firms has sprung up promising similar insights. Belgium’s ScriptBook, founded in 2015, says its algorithms can predict a movie’s success just by analyzing its script. Israeli startup Vault, founded the same year, promises clients that it can predict which demographics will watch their films by tracking (among other things) how its trailers are received online. Another company called Pilot offers similar analyses, promising it can forecast box office revenues up to 18 months before a film’s launch with “unrivaled accuracy.”

The water is so warm, even established companies are jumping in. Last November, 20th Century Fox explained how it used AI to detect objects and scenes within a trailer and then predict which “micro-segment” of an audience would find the film most appealing.

Looking at the research, 20th Century Fox’s methods seem a little hit or miss. (Analyzing the trailer for 2017’s Logan, the company’s AI software came up with the following, unhelpful tags: “facial_hair,” “car,” “beard,” and — the most popular category of all — “tree.”) But Queisser says the introduction of this technology is overdue.

“On a film set now, it’s robots, it’s drones, it’s super high-tech, but the business side hasn’t evolved in 20 years,” he says. “People use Excel and Word, fairly simplistic business methods. The data is very siloed, and there’s hardly any analytics.”

That’s why Cinelytic’s key talent comes from outside Hollywood. Queisser used to be in finance, an industry that’s embraced machine learning for everything from high-speed trading to calculating credit risk. His co-founder and CTO, Dev Sen, comes from a similarly tech-heavy background: he used to build risk assessment models for NASA.

“Hundreds of billions of dollars of decisions were based on [Sen’s work],” says Queisser. The implication: surely the film industry can trust him as well……….Read More>>